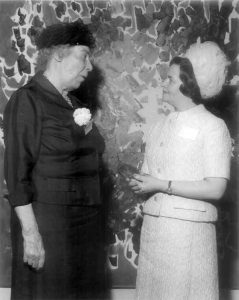 Louise Manny was born in Gilead, Maine, and at the age of 13 moved to Newcastle with her Mother and Father.  Her father was in the business of ‘spool-making”. It should be noted that Louise was reading at the age of 3.  Louise was educated at Harkins Academy, St. Mary’s Academy, Halifax Ladies College and the Ursuline Convent in Quebec City.  She graduated from McGill University in 1913 with a Bachelor of Arts Degree, and Honours in French and English.

Dr. Manny taught at Halifax Ladies College for a brief period before returning to Newcastle to assist her father, who was in failing health.  It was then she began her life work of collecting and preserving books and writing about shipbuilding on the Miramichi; Kent County and Bathurst.

At the insistence of her old friend, Lord Beaverbrook, and with his assistance, Dr. Manny began collecting folk songs and folklore in 1947. They both wanted to preserve the musical heritage of the area.  She would travel up and down the River with her ‘portable recording machine’ coaxing shy and reluctant individuals to pass on their words and music. 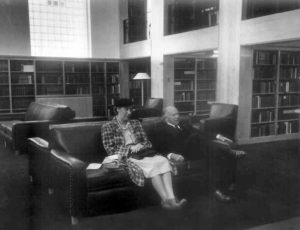 She had a radio show every Wednesday and it was a huge success.  Only problem with it being on a Wednesday was it was a work day and various managers were finding that their personnel would be missing for that hour the show was on.  They finally convinced her to change the day from Wednesday to Sunday.  The show was still a huge success and gathered an even bigger audience.

From there began the format for the Miramichi Folk Song Festival, which has evolved into the longest running folk song festival in Canada.

When Lord Beaverbrook undertook restoration of ‘The Enclosure” his gift to the Province, Dr. Manny was entrusted with the task of making sure the natural beauty was preserved.

After buying back his boyhood home, “The Manse”, Lord Beaverbrook had it refurbished and gave this to the City of Miramichi.  He also supplied several thousand books sent over from England, and it became recognized as “The Old Manse Library”.  Dr. Manny was the Librarian from 1953 to 1967.

She had a book “SONGS OF MIRAMICHI’ , in collaboration with Dr. James R. Wilson, which was published in 1968, with the aid of a Canada Council Grant.

Dr. Manny had two Honorary Doctor of Law Degrees conferred upon her by the University of New Brunswick and St. Thomas University.  In 1967 she was one of eleven Canadian women who received a Centennial Award given by the National Council of Jewish Women and presented at Expo ‘67.

In July 1969 the New Brunswick government named a mountain, Mount Manny, in the Historians Range in her honour.

For many years Dr. Manny’s recreation was tennis and badminton. She excelled in both games and won a number of Maritime and Provincial Tennis championships in the 1930’s.

Portrait in header of website by Robert Carter
www.crackedhat.com